I’ve mentioned before Andy’s obsession with banana bread. His favorite is a very simple one with a ton of sugar and butter in it.

I recently had kind of an emergency tea party when my friend Kevin was in town and I made a low sugar, mini chocolate chip banana bread, and while Andy enjoyed it, I could tell it wasn’t as satisfying for him as his regular banana bread. I had to whip up some “Andy approved” bread a week later.

When I noticed three bananas going bad in the fruit bowl, I knew I needed to do some baking. This time I wanted to make something a little different, so I found a basic banana muffin recipe on the Internet, and did my own thing. I tried to make the recipe as healthy as possible, so its both low-fat and low-sugar.

The ovendial’s numbers are wearing off, so it’s always kind of a crapshoot as far as the temperature goes. It was close to 350, I think. Maybe. In a normal oven, the muffins bake for 15-20 minutes, in mine a good 25.

I only used up the bananas. There are  more muffin cups and applesauce for another day. 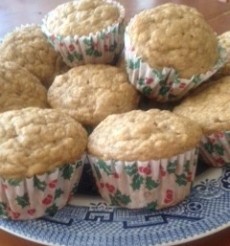 I'm a writer and performer living in Southern California.
View all posts by cschoenwald →
This entry was posted in Uncategorized and tagged baking, banana recipes, frugal, muffins. Bookmark the permalink.